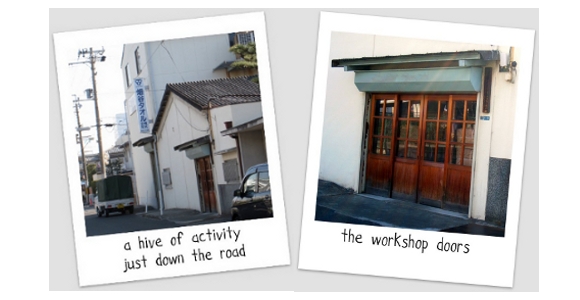 by Jacqui Miyabayashi of Mee A Bee

About five years ago I moved from downtown Osaka to a much smaller city about an hour south. With a population of just 150,000 I often wondered why there were so many towel shops everywhere. This curiosity led me to do a bit a research and I found out that this area is a well-known towel manufacturing district, collectively known as the Senshu Towel District.

This tiny city produces almost half of the towels made in Japan. What’s really interesting is that production is undertaken by over a hundred small businesses locally. Most have only a few employees and their ‘factories’ are barely more than small workshops housed in old buildings and garages. It’s kind of funny to see them in amongst houses in quiet residential areas.

In the late 1800s a local man began experimenting with towel making. It took him about two years to perfect the weaving of long strands of cotton into toweling pile. He then pioneered a method of bleaching the towels that is still considered unique to this area. The resulting product was very soft, extremely absorbent and long-lasting. Atozarashi (bleached after weaving) towels are beautiful and so luxurious.

It’s very difficult to compete with mass-produced, cheap imports so the industry differentiates itself by consistently making a high quality towel. Most senshu towels are still made according to the traditional technique. The cotton is imported, mainly from the USA, but all of the weaving and sewing is done right here in my city. Great strides have been made with environmentally-friendly techniques. Low-impact chemicals, low noise-emitting machinery, hand-finishing. Organic cotton has been incorporated into some lines, others are not bleached and some are colored with plant dyes. Senshu towels are great for people with sensitive skin and are lovely for babies.

While not exactly handmade, the senshu towel is a great example of a traditional industry that has evolved to survive in the modern world. By remaining committed to their core-product, keeping up with consumer trends, incorporating new technology and being dedicated to quality, the group ensures they will continue to be a strong local employer for hopefully another one hundred or so years! 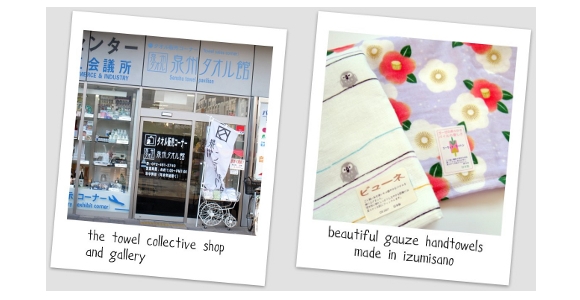 If you’re interested in buying senshu towels you could try Rakuten, Japan’s biggest online shopping site. Want to have a little bit of Japan for your very own? I will be giving away the two lovely towels pictured on the right to a randomly selected commenter. Open internationally, just leave a comment! Also be sure to visit my blog http://www.bloomingnihon.blogspot.com for snippets of my life in Japan and my Mee A Bee work.

This giveaway is now closed! The winner is comment #18 from Allison-hope you love your towels!